Madeleine Albright observed drily on meeting the Great Leader’s son, “Shaking hands and posing for cameras, I found that we were about the same height, in part because we wore the same size heels.”

The journey of discovery that the reader of ‘Fascism | A Warning’ encounters is one that does not bow to wonder and awe. Instead, it distressingly unveils how in the twentieth century and beyond, power obsessed individuals have exploited their fragile societies in order to satiate their craving for ideological primacy or territorial dominance.

The author’s indelible experience as a child fleeing a Czechoslovakia on the brink of World War Two evocatively informs her perspective on world affairs. Her position is distinct since it is also shaped through the lens of an academic, a former United Nations ambassador and a Secretary of State. Her penetrating insight into the psyches of despotic leaders from across the continents is penned with the authority of a statesman yet counterbalanced with a scholarly persuasiveness.

This captivatingly written book is hard to put down. It is a highly compelling read that pragmatically explores the origins and components of right wing extremism where the rationally expressed concepts are interlinked with cautionary tales from modern history.

A worthy ‘five-out-of-five stars’ read that may well leave the layperson with a yearning to comprehend how this complex world continues to harbor the ingredients that could conflagrate into perpetual conflict and suffering.

Thus, for those interested in the fates of our nations, a further study to consider would be ‘World Order’ by Henry Kissinger.

Book review: The End of Policing 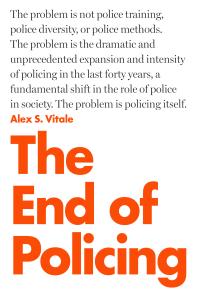 If like me, policing is your career, perhaps even your purpose, the title alone activates a whole range of almost overwhelming reactions, driven by decades of experience and no doubt some biases both conscious and unconscious.

Alex Vitale’s, End of Policing is highly critical of policing practice in the United States but unlike many, Vitale’s criticisms are built upon a more meaningful understanding of the broader systems in which policing operates.  Vitale does not excuse police for our failings but recognises that we are an organisational product of our environment and that we operate within a much broader system.

“….even racially neutral enforcement of traffic laws will invariably punish poorer residents who are least able to maintain their vehicles and pay fines. Well-trained police following proper procedure are still going to be arresting people for mostly low-level offenses, and the burden will continue to fall primarily on communities of colour because that is how the system is designed to operate—not because of the biases or misunderstandings of officers.”

A very similar argument could be mounted about Police Bail in Australia which disproportionately impacts on “poorer residents” because often, they do not have a stable address or steady employment or have a history of criminal offending driven in part by social disadvantage.  Invariably, these police bail decisions are supported by the Courts.  This is how our system is designed to operate.

Vitale is deservedly critical but understands police are a blunt instrument being used to stabilise, or not, some of society’s most complex problems. Vitale, does not argue for an end of policing but for a narrowing of our remit. Vitale also acknowledges the narrowing remit alone would not be effective.

“We don’t need empty police reforms; we need a robust democracy that gives people the capacity to demand of their government and themselves real, nonpunitive solutions to their problems.”

For many years I have been present at organisational briefings that include warnings of “an approaching cliff” because of events in other countries.  Rarely, have we in Australia experienced the “edge of the cliff” perhaps “defunding the police” and “black lives matter” will be different.

If police in Australia are to be proactive and not wait for others, without genuine context, to impose solutions on policing, perhaps reading Vitale’s End of Policing would be a good way to begin the conversation.

Journal of Contingencies and Crisis Management

The AIPM Librarian is currently working from home. Please contact via email

Visitors are welcome, but please make an appointment first, as we are a secure site.